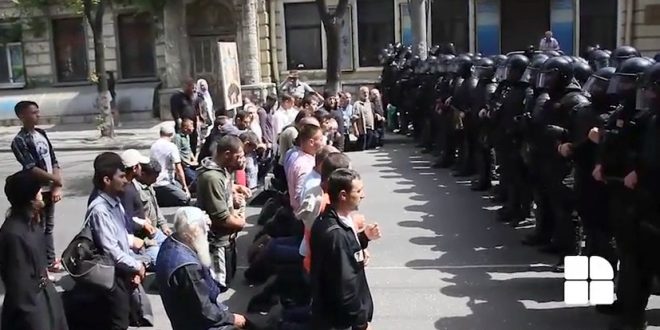 Religious hard-liners in Moldova’s capital tried to crash a rally in support of the country’s LGBT community but were fended off by police who deployed tear gas.

The Orthodox Christian protesters unsuccessfully attempted to break through a police line set up to guard dozens off demonstrators who marched through Chisinau in the May 19 rally against homophobia. Video footage from the scene showed Orthodox activists rinsing their eyes with water after apparently being repelled by police.

Participants in the march were guarded by police escorts after a similar rally last year was halted by police to avert a confrontation with religious counterprotesters. At last year’s march, scores of participants were evacuated in buses by police after eggs and water were thrown at them by those attending the rival protest.

My report on last year’s similar scene is here.