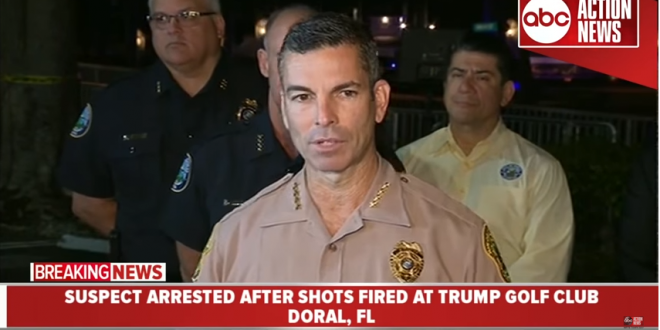 MIAMI: Man Wounded By Police After Ranting About Trump And Firing Gun In Lobby Of Trump Doral Resort

A man who was allegedly “actively shooting” in the lobby of Trump National Doral Miami in Doral, Fla., and “yelling” about President Trump was shot and wounded by police early Friday morning, authorities said.

Both Miami-Dade Police and Doral Police responded to reports of shots fired at the hotel, Doral Police Chief Hernan Organvidez said during a news conference. Upon arrival officers from both police departments exchanged fire with the man and were able to take him into custody “without further incident,” Organvidez said.

The man was transported to a nearby hospital after being shot multiple times in the lower extremities, WPLG reported. One officer sustained a broken wrist, according to reports. The officer was also taken to a hospital and is in good condition, Organvidez said.

The shooting at the resort — located off the Palmetto Expressway at Northwest 36th Street and 87th Avenue — happened about 1:30 a.m., Miami-Dade Police Director Juan Perez said during a pre-dawn news conference outside the resort that was carried live by local television stations.

“He had an American flag that he did drape over the counter — that all will be part of the investigation, we’re going to take it from there and see what his real motives are, ” Perez said. Perez said the incident was not immediately being considered an act of terrorism — but that possibility is not being discounted.

Suspect Shot, Hospitalized And Arrested After Going On Shooting Spree In Lobby Of Trump Doral Hotel In Miami https://t.co/tYlRK31ndd pic.twitter.com/rfnRR58I5y