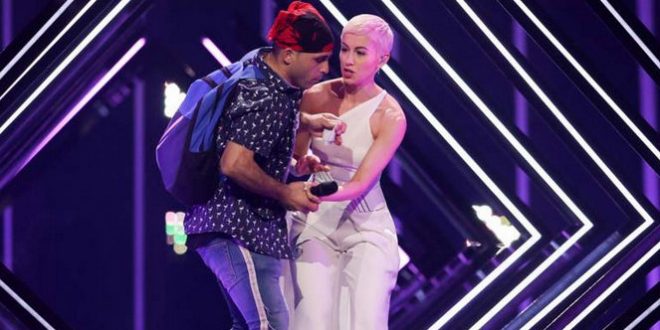 A man stormed the stage while the UK’s entry, SuRie, was performing at the Eurovision Song Contest. SuRie was singing her song Storm when a man wearing a rucksack ran onto the stage, grabbed her microphone, and appeared to say: “Nazis of the UK media, we demand freedom.”

He was swiftly dragged off stage and SuRie continued performing the song. SuRie has been given the chance to sing again as the show’s final performance but declined. The invader is in police custody, the European Broadcasting Union said. He is understood to be a European citizen but not British.

Once her microphone was back in her hand she sang the lyrics, “Don’t give up,” to huge cheers from the crowd. Presenter Graham Norton told viewers: “We are still reeling, there was a stage invasion.”

There was an outpouring of support for the singer on social media. JK Rowling wrote: “That was everyone who’s ever been on stage’s worst nightmare and it must have been scary, but what a pro, what a recovery.”

Former Eurovision contestant Cheryl Baker tweeted “love your heart” to SuRie and added: “Where was the security? He could have had a weapon!”

A statement from the EBU: pic.twitter.com/qiH1Df0MgW