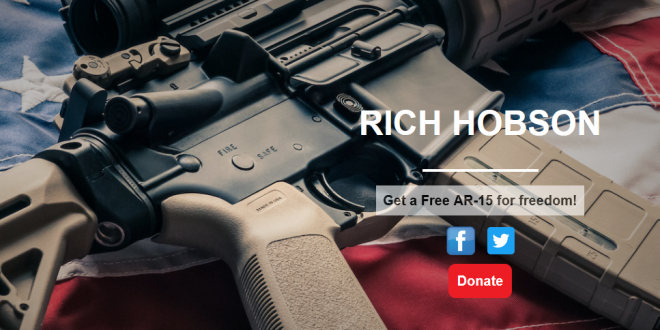 Longtime Roy Moore Aide Gives Away AR-15 To Promote His US House Campaign: Every Family Should Own One

Longtime Roy Moore aide Rich Hobson is giving away a Smith & Wesson AR-15 to promote his bid for the US House.

Because every home should have one.

“In the modern debate over our Second Amendment rights, too often, the defenders of that amendment stress rights for hunters and sportsmen,” Hobson said on the website announcing the contest. “But the Second Amendment’s language points to a greater burden of every household to be prepared to defend this country if necessary.

“Because of that, I believe that it is right and proper for every family in the country to own an AR-15 Defense Rifle. Fortunately, we have an outstanding professional military standing between us and the bad guys, but that does not relieve us of the responsibility to be prepared in a worst case scenario.”

Once a winner is announced, Hobson says their information will be provided to Southern Outdoor Sports in Dothan, which will comply with all the rules, background checks, and transfer action in keeping with federal law.

Hobson is running against incumbent Rep. Martha Roby. The GOP primary also includes Bobby Bright, Tommy Amason and Barry Moore. On the Democratic side, Tabitha Isner and Audri Williams have entered the race.

I think we should ALL enter the contest.

Previous Alabama Gov Issues Her Second Denial Of “Disgraceful, Disgusting Lie” That She Is A Closeted Lesbian [VIDEO]
Next Melania’s 2017 Photo Royalties As Much As $1 Million