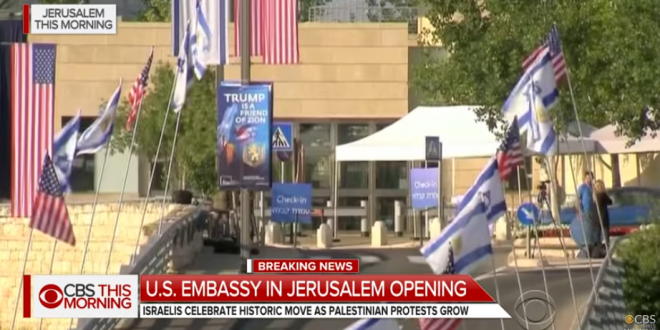 A small interim embassy will start operating on Monday inside the existing US consulate building in Jerusalem. A larger site will be found later when the rest of the embassy moves from Tel Aviv. The opening ceremony was brought forward to coincide with the state of Israel’s 70th anniversary.

President Trump is expected to address those attending Monday’s event via video link. In a tweet, he said it was “a great day for Israel.”

Alongside Ivanka Trump and Jared Kushner, who are both senior White House advisers, Treasury Secretary Steven Mnuchin and Deputy Secretary of State John Sullivan will be at the ceremony. The EU has voiced strong objections to the embassy move.

U.S. Embassy opening in Jerusalem will be covered live on @FoxNews & @FoxBusiness. Lead up to 9:00 A.M. (eastern) event has already begun. A great day for Israel!

What an amazing day!
Thank you, @POTUS Trump. https://t.co/ehKp29jYLt