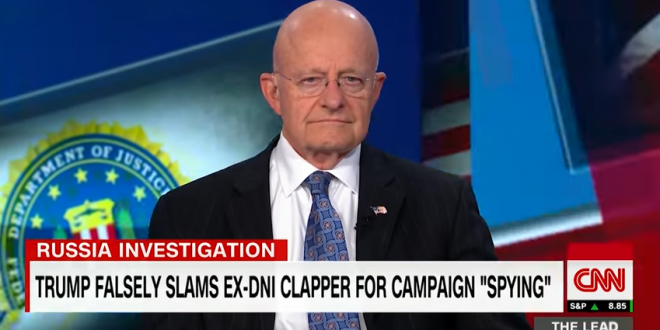 James Clapper Rips Into Trump’s Orwellian “Spygate” Lies: “Up Is Down, Black Is White, Peace Is War”

“He deliberately spun it, distorted it. I mean this is George Orwell — up is down, black is white, peace is war. That’s exactly what I didn’t say. I took aversion to the word spy, it was the most benign version of information gathering. The important thing is the whole reason the FBI was doing this was concern over what the Russians were doing to infiltrate the campaign, not spying on the campaign. Of course, he turned that completely upside-down in his tweet, as he is wont to do.” – Former Director of National Intelligence James Clapper, speaking to Axios.

Clapper has now admitted that there was Spying in my campaign. Large dollars were paid to the Spy, far beyond normal. Starting to look like one of the biggest political scandals in U.S. history. SPYGATE – a terrible thing!