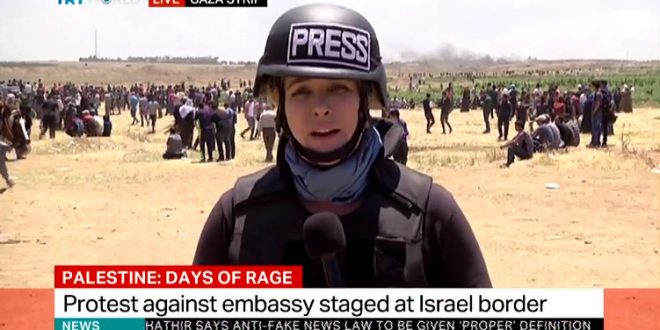 Thousands of Palestinian protesters converged along the border with Israel on Monday, drawing Israeli fire that killed at least 16 people in the bloodiest day of weeks of demonstrations and casting a cloud over Israel’s festive inauguration of the new U.S. Embassy in contested Jerusalem.

With their anger fueled by the embassy opening, protesters set tires on fire, sending thick plumes of black smoke into the air at several spots along the border, while the Israeli military said protesters assaulted the border fence. By midafternoon, at least 16 Palestinians, including a 14-year-old boy, were killed while over 500 were wounded by Israeli fire, Palestinian health officials said.

In the West Bank, several thousand people gathered in the center of Ramallah, while hundreds marched to the Qalandiya crossing on the outskirts of Jerusalem, where protesters threw stones at Israeli troops. The protest in Gaza was to be the biggest yet in a weekslong campaign against a decade-old blockade of the territory. The march was also directed at the inauguration of the U.S. Embassy in Jerusalem later Monday.

U.S. Embassy opening in Jerusalem will be covered live on @FoxNews & @FoxBusiness. Lead up to 9:00 A.M. (eastern) event has already begun. A great day for Israel!

BREAKING: The Israeli army has killed at least 16 people and wounded hundreds in a protest near the Gaza fence. pic.twitter.com/dzROR8t5FP

Sixteen Palestinians were killed during protests in Gaza, hours before the US was due to open its embassy in Jerusalem, the Palestinian Ministry of Health said. https://t.co/bW3Y9VCWn2 pic.twitter.com/iyYhAAjMdi