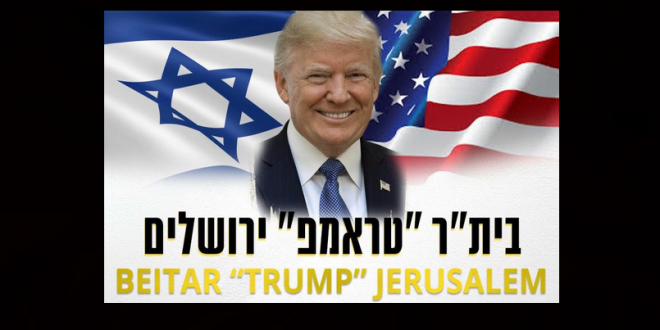 An Israeli soccer team has changed its name to honor President Donald Trump, a day before the U.S. embassy is slated to move to Jerusalem. “For 70 years Jerusalem been awaiting international recognition, until President Donald Trump, in a courageous move, recognized Jerusalem as the eternal capital of Israel,” the Beitar Trump Jerusalem football club — formerly known as the Beitar Jerusalem Football Club — said on its Facebook page. “President Trump has shown courage, and true love of the Israeli people and their capital, and these days other countries are following his lead in giving Jerusalem its rightful status.”

La Familia are a far-right, football supporters’ group of the Israeli Premier League club Beitar Jerusalem. The group is notorious for chants that insult Arab players, and for displaying the flag of the banned Kach party. Cheers with lines such as “death to the Arabs” and “Muhammad is a homosexual” are common. Unlike other top clubs in the country, no Arabs have ever played for Beitar. Supporters stormed the Malha Mall after a match in March 2012 while chanting racist slurs. It was reported that Arab workers were harassed and beaten

24 hours before The United States open their new embassy in Jerusalem, Beitar Jerusalem FC have announced that from now on they will be know as Beitar ” Trump ” Jerusalem. Politics & Football at its peak. pic.twitter.com/Cak3yx8sBr

This is incredible.
Beitar Jerusalem, the soccer team known for its fans’ chants of “death to the Arabs” and “we will burn your village”, is changing its name to Beitar Trump Jerusalem https://t.co/Yq7xUgh4Xp

Previous ISRAEL: Ivanka, Jared, And Steve Mnuchin Arrive For Opening Of New US Embassy In Jerusalem [VIDEO]
Next CHATTER AWAY: Overnight Open Thread