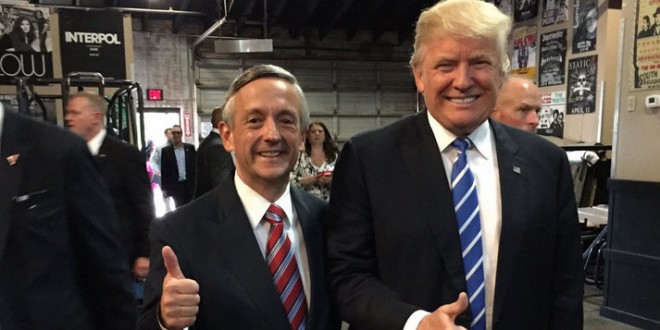 One of the speakers at Monday’s ceremony marking the relocation of the U.S. Embassy to Jerusalem will be a Christian leader with a history of hateful comments against Muslims, Mormons, gay people and Jews.

Dallas-based Robert Jeffress, a Baptist pastor with a large following in Texas, told Fox News that he would be leading a prayer during the ceremony. Jeffress serves as an informal advisor to Trump on faith-based issues of U.S. President Donald Trump, and is also known for his support for Prime Minister Benjamin Netanyahu’s government.

Senate candidate Mitt Romney of Utah said Sunday a prominent Baptist minister shouldn’t be giving the prayer that opens the US Embassy in Jerusalem because he’s a “religious bigot.”

In a tweet, the former Massachusetts governor and 2012 Republican presidential nominee criticized Dallas minister Robert Jeffress for his remarks about Jews, Mormons and Islam. The Jerusalem Open House on Monday also lambasted Jeffress’s participation, saying he had in the past called gay rights promoters “pedophilia activists” and said homosexuality was a “perversion.”

The role of Jeffress, pastor of First Baptist Church in Dallas, a Southern Baptist megachurch, underlines the significance of the Jerusalem event as an appeal to Christian conservatives, part of President Donald Trump’s base of supporters.

Robert Jeffress says “you can’t be saved by being a Jew,“ and “Mormonism is a heresy from the pit of hell.” He’s said the same about Islam. Such a religious bigot should not be giving the prayer that opens the United States Embassy in Jerusalem.

Historic Christianity has taught for 2,000 years that salvation is through faith in Christ alone. The fact that I, along with tens of millions of evangelical Christians around the world, continue to espouse that belief, is neither bigoted nor newsworthy.

RELATED: Last year Jeffress, who once called Obama the literal anti-Christ, called on the media to “stop demonizing Republicans.” Following the 2015 Obergefell ruling, Jeffress consoled his congregation by telling them that gay marriage will only speed the end times and the return of Jesus. And according to Jeffress, the police are “ministers of God” sent to “punish evil-doers.”