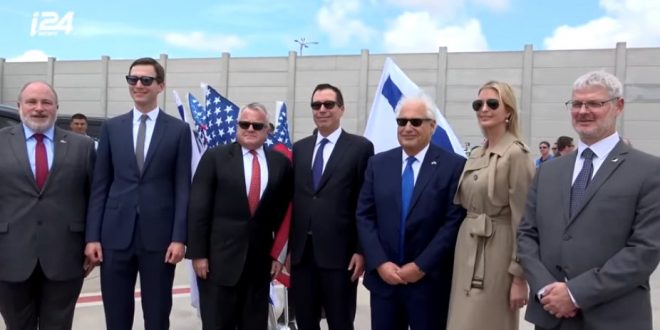 ISRAEL: Ivanka, Jared, And Steve Mnuchin Arrive For Opening Of New US Embassy In Jerusalem [VIDEO]

US President Donald Trump’s daughter Ivanka and her husband, Jared Kushner, have arrived in Israel ahead of the opening of the new US embassy in Jerusalem on Monday. The couple – both senior White House advisers – will attend the ceremony. Mr Trump himself will not be there.

His decision to move operations from Tel Aviv angered Palestinians. The plan was brought forward to coincide with the state of Israel’s 70th anniversary. Israel regards Jerusalem as its “eternal and undivided” capital, while the Palestinians claim East Jerusalem – occupied by Israel in the 1967 Middle East war – as the capital of a future state.

Mr Trump’s decision to recognise Jerusalem as Israel’s capital broke with decades of US neutrality on the issue and put it out of step with most of the international community.

Ivanka Trump and her husband Jared Kushner are part of the 250-strong delegation from the US attending the official dedication ceremony for the US Embassy in Jerusalem’s Arnona neighborhood on May 14. Kushner, who also serves as a White House adviser, has been a key architect of the US administration’s efforts to broker an Israeli-Palestinian peace deal.

The American delegation arriving early next week will be led by Treasury Secretary Steve Mnuchin, and will include some 40 lawmakers. Republican Senators Ted Cruz and Lindsay Graham are reportedly expected to attend, as is Trump’s Middle East envoy Jason Greenblatt. The group is also expected to include Jewish leaders and heads of pro-Israel Christian organizations.

The visit is a rare public outing for Kushner, who has lost his power-player status. His descent began in February when he lost his access to top-secret U.S. government intelligence. His interim security clearance was revoked by his father-in-law’s chief of staff, John Kelly, after Trump handed that authority over to Kelly. The number of mistakes in his security clearance application has become a running joke: Kushner reportedly submitted four addenda detailing over 100 errors and omissions in the forms he filled out.

Those “mistakes” included incomplete reporting of foreign contacts – something that did not escape the team led by Justice Department Special Counsel Robert Mueller, investigating Russian meddling in the 2016 presidential election and possible collusion between the Trump campaign and the Kremlin. That probe is also reportedly looking into financial relationships between Kushner’s family business and foreign entities, including Israeli companies.

Previous White House Spox On Staffer’s Mocking Of McCain’s Cancer: I Don’t Know If That Comment Was Even Made
Next ISRAEL: Soccer Team Whose Far-Right Fans Chant “Death To Arabs” Changes Name To “Trump Jerusalem”