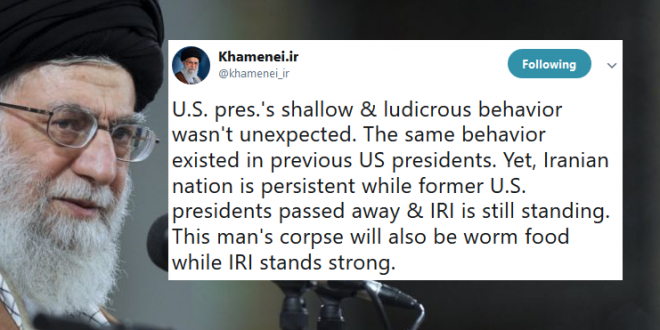 Iran’s supreme leader denounced President Donald Trump on Wednesday over his decision to pull America out of the 2015 nuclear deal, while lawmakers lit a paper U.S. flag on fire inside parliament, shouting, “Death to America!”

In comments before school teachers, Khamenei told Trump: “You cannot do a damn thing!” The exhortation from Khamenei, who has final say on all state matters, follows a pattern of Iranian leaders declaring their nation’s ability to resist foreign pressure or interference. “The body of this man, Trump, will turn to ashes and become the food of the worms and ants, while the Islamic Republic continues to stand,” Khamenei said.

Earlier Wednesday, the lawmakers, including a Shiite cleric, held the flaming flag alight as their colleagues joined their chants. They also burned a piece of paper representing the nuclear deal and stomped on the papers’ ashes.

Last night you heard the shallow statements Trump made. There were several lies in his speech. He threatened the Iranian govt. and the Iranian nation, claiming he would do one thing or another. On behalf of Iranian nation: “Mr. Trump, you couldn’t lift a finger if you tried.”

A few days ago Trump wrote a letter to leaders of #PersianGulf states, which was revealed to us. He wrote: “I spent $7 trillion and you must do something in return.” The U.S. wants to own humiliated slaves.

The reason for the U.S.’s enmity towards the Islamic Republic’s establishment is that the United States had thorough domination over Iran, but the Islamic Revolution severed its hands from Iran.

U.S.’s problem with Iran is not the nuclear energy; that’s just an excuse. We accepted the #JCPOA but animosities towards the Islamic Republic never ended.”