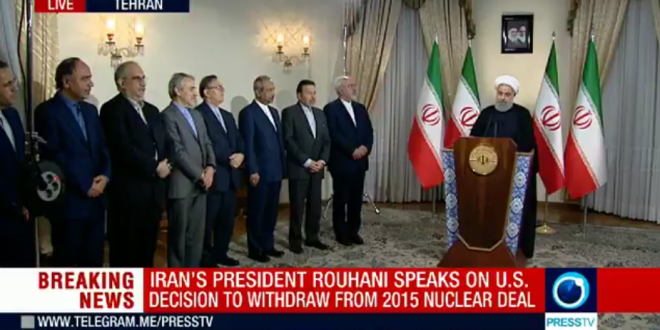 Despite lobbying from European allies, President Trump moved forward Tuesday with his campaign promise to pull out of the 2015 nuclear agreement with Iran. He made the announcement from the White House, where he denounced the deal as “defective at its core.”

Mr. Trump said the 2015 agreement that included Germany, France and Britain was a “horrible one-sided deal that should never ever have been made.” He added that the U.S. “will be instituting the highest level of economic sanction.”

Moments later, Iranian President Hassan Rouhani said he has ordered the foreign minister to negotiate with other countries in the nuclear deal. In a national address from Tehran, Rouhani said there is a “short time” to negotiate with other world powers to keep the deal in place, and that if negotiations fail, the Islamic Republic will enrich uranium “more than before” in the coming weeks.