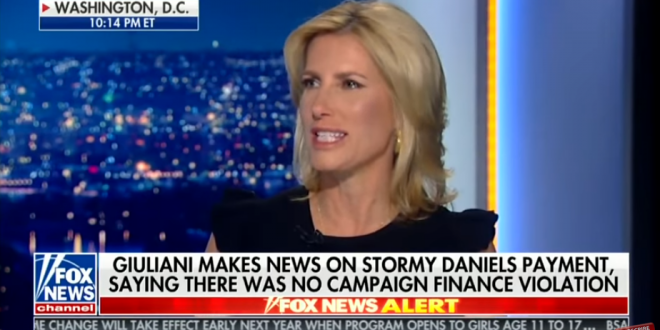 “Did Trump pay it after April 6th?” Ingraham asked, the day Trump denied knowing about the payment. “The left is jumping all over that tonight, saying, ‘What the heck? He did know, he didn’t know? Rudy’s on TV?’ What’s going on here?”

“You have the president on tape on Air Force One saying he did not know about the payment, and you’ll have to ask Michael Cohen about that,” Ingraham said. “Rudy just goes on with Hannity and says ‘Oh no, he reimbursed them.’” “I love Rudy, but they better have an explanation for that,” she added. “That’s a problem.”

Previous Glorious Leader Does Giuliani Damage Control
Next Avenatti Is “Speechless” After Giuliani’s Admission: Trump Will Not Serve Out His Term, No Way, No How