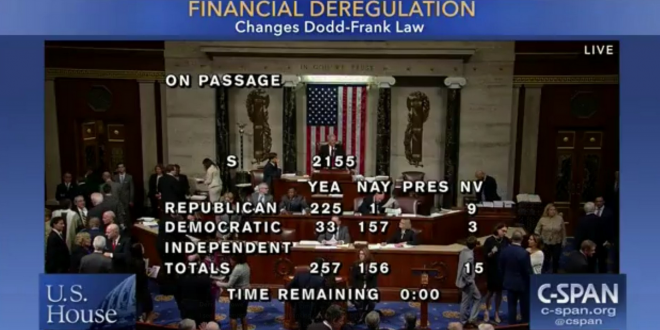 The House sent a major revision of banking regulations to President Trump’s desk on Tuesday after conservatives who wanted a more sweeping rollback decided to accept a bipartisan deal crafted by the Senate. Supporters said the bill would give businesses more access to loans for homes and cars that they cannot get now because of government regulations. Critics said the measure would thwart efforts to fight discriminatory lending, and increase the risk of future bank failures and bailouts.

The bill, passed the Senate in March with 67 votes, including 17 from moderate Democrats. It would roll back some of the mandates imposed on banks in the 2010 regulatory overhaul law known as Dodd-Frank, which was enacted in response to the 2008 financial collapse. The House vote for passage was 258-159, with just 33 Democrats supporting it and one Republican opposed.

The House voted Tuesday to ease rules for midsize and regional banks, in what's considered the largest undoing to date of banking rules put in place in the wake of the financial crisis. The vote was 258-159. https://t.co/7hT9DulDPB