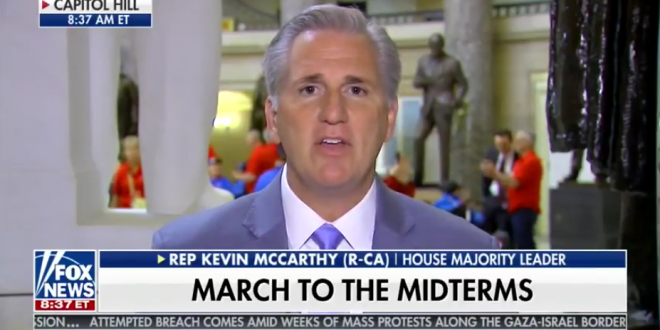 House Majority Leader Kevin McCarthy: The GOP Will Hold The House Because Americans Are Too Smart

“People can underestimate us. They’ve done that before. All they want to do is capture this government to try to impeach this president or stop anything from happening, or raising your taxes. I think the American public is too smart for that. I’m very confident that we can keep the majority. I know that history plays against us, but remember this – we have one of the best economies moving forward, 90% of America just got a tax cut, and look what we did with combating human trafficking. Look at what’s happening in North and South Korea.” – GOP House Majority Leader Kevin McCarthy, speaking today on Fox & Friends.

McCarthy is widely expected to succeed Paul Ryan as House Speaker if the GOP retains control following Ryan’s retirement. This morning he told the Fox panel that he hasn’t heard anything about the “chatter” that Ryan might resign before the end of his term.

Previous State TV Backs CIA Nominee: She Should Double Down And Say I’m Proud Of My Role In Torturing Suspects
Next WEST VIRGINIA: Don Blankenship Leads In Two Polls