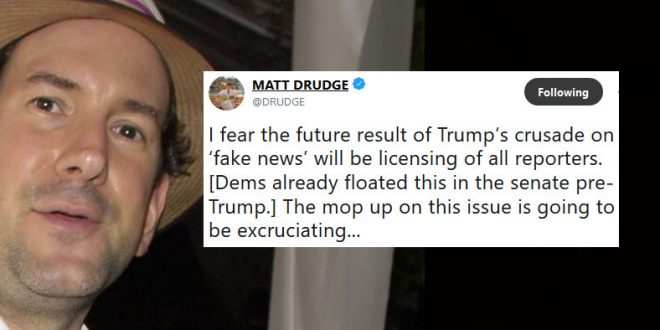 Drudge Report chief Matt Drudge criticized President Trump on Wednesday for his threat to take away credentials from news outlets. Drudge, who is largely supportive of the president, added that Senate Democrats had floated such an idea before Trump was president. Trump was referencing a recent report from the politically conservative Media Research Center that found 91 percent of “evaluative” statements made on the three main nightly newscasts from June to August of last year about Trump were negative.

I fear the future result of Trump’s crusade on ‘fake news’ will be licensing of all reporters. [Dems already floated this in the senate pre-Trump.] The mop up on this issue is going to be excruciating…

Not Trumps fault. If propagandists had better ethics and values perhaps your “profession” wouldn’t be in this mess. Don’t blame the patient for malpractice, blame the DOCTOR.

Will the licensing fee be paid to essential consultants,LLC. ?