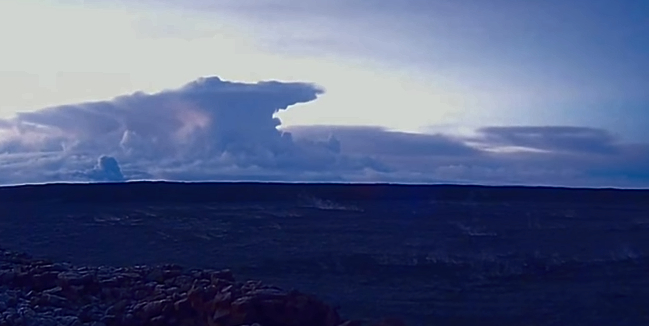 Hawaii’s Kilauea volcano erupted from its summit before dawn Thursday, shooting a dusty plume of ash about 30,000 feet into the sky. The explosion came at about 6 a.m. local time (12 p.m. ET) after two weeks of volcanic activity and the opening of more than a dozen fissures east of the crater that spewed lava into neighborhoods, said Mike Poland, a geophysicist with the U.S. Geological Survey. Residents who live in a nearby town reported light amounts of ash falling following the eruption.

Staff at the volcano observatory and the national park had previously been evacuated. Since a new zone of Mount Kilauea began erupting almost two weeks ago, lava has wrecked dozens of homes and forced hundreds of people to be evacuated. A red aviation code had already been issued – warning pilots to avoid the potentially damaging ash cloud. The USGS had warned that an explosive eruption at Kilauea was becoming more likely as the volcano’s lava lake was lowering.

Warning from @CivilDefenseHI that an explosive eruption has occurred at #Kilauea. Ash plume expected to spread to SE. Driving conditions may be dangerous. Shelter in place if you can.

Hawaii in one pic. This dude is hitting it at par on golf course. #Kilauea pic.twitter.com/RM9lcD3QWt

Volcano erupts at the summit of Hawaii’s #Kīlauea volcano 🌋 pic.twitter.com/qpOajre3br

Previous TRAILER: Murphy Brown (The Reboot)
Next One Million Moms Claims Victory For Cancellation Of Show That Finished Its First Season In 114th Place