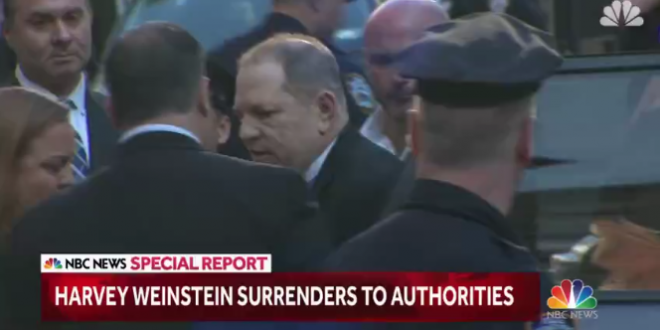 Film producer Harvey Weinstein on Friday surrendered to authorities at a New York City police station on sex crime charges, months after he was toppled from Hollywood’s most powerful ranks by scores of women accusing him of misconduct.

Weinstein arrived at the station house shortly at about 7:25 a.m. EDT wearing a dark jacket over a blue sweater and white open-collared shirt and dark denim jeans, carrying what appeared to be three thick books under his right arm.

Police officers escorted him inside as scores of journalists pushed up against barricades for pictures, while three police helicopters circled overhead. Weinstein is expected to be charged with raping one woman and forcing another to perform oral sex on him.

Harvey Weinstein turning himself in…he’ll come out in the next 2 hours in handcuffs. Just the first step…but a huge moment for the survivors of his sexual predation. pic.twitter.com/p1JHwP4KQQ

Previous Trump Junior Is Shopping For A Book Deal
Next ONTARIO: Bomb Injures 15 At Indian Restaurant