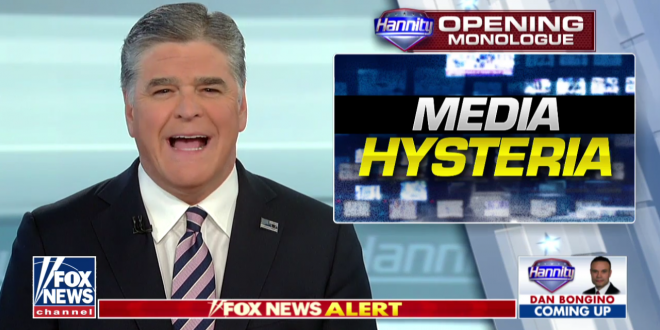 Hannity Attacks Media For Reporting On His Disastrous Interview With Giuliani: Journalism Is Dead [VIDEO]

“If you can believe it, all the news we just laid out for you, all those crucial developments that you just watched that we aired last night live on this program, were largely ignored by the abusively biased news media in this country. Instead, for 24 hours these lazy, these abusively biased echo chamber people in the fake news overpaid media have been erupting over only one 30 second clip again and again and again. How many times have I said journalism in America is dead?

“It’s almost unbelievable but it’s all too predictable. The media just cannot stop playing this show, meaning Hannity, and the interviews we conduct. It seems like they’re featuring me more than their own hosts. Now, I’m beginning to think at this point maybe I need to start collecting a paycheck from ABC, CBS, NBC, fake news CNN and the conspiracy theory network MSNBC.” – Sean Hannity, speaking on last night’s show.