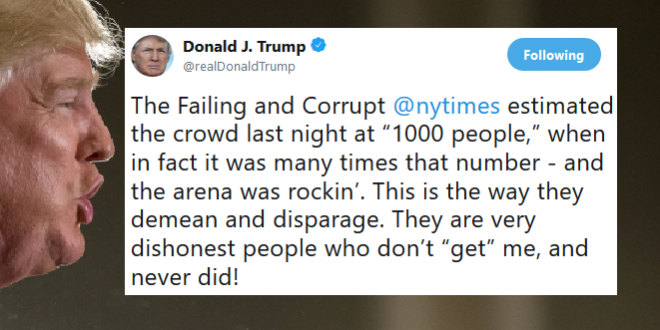 Here’s the report that has Trump ever so pissed:

President Trump accused Democrats on Tuesday of siding with brutal immigrant gang members over American citizens and implored Republican voters to turn out in November’s midterm elections or risk the safety of their country.

He worked his audience of about 1,000 into a frenzy by recalling the term he used this month during a discussion of how difficult it was to target suspected undocumented immigrants, including criminal gang members, for deportation.

The Failing and Corrupt @nytimes estimated the crowd last night at “1000 people,” when in fact it was many times that number – and the arena was rockin’. This is the way they demean and disparage. They are very dishonest people who don’t “get” me, and never did!

Previous Ambien Maker: Racism Is Not A Known Side Effect
Next Trump Breaks Silence On Roseanne To Cry That Disney’s CEO Has Apologized To Valerie Jarrett But Not To Him