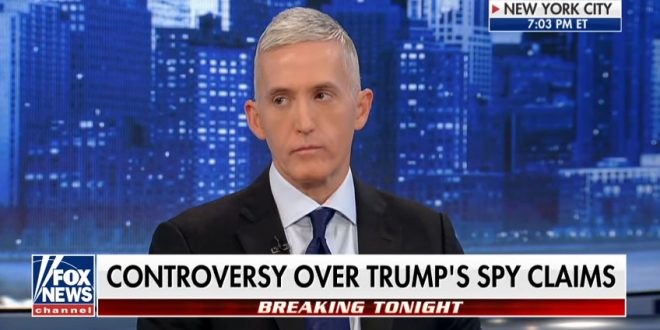 Gowdy Slams “Spygate” Claims: When Trump Finds Out What Happened, He’ll Be Glad For The FBI [VIDEO]

Outgoing Rep. Trey Gowdy (R-S.C.), the House Oversight Committee Chairman and Trump supporter, said in an interview on Fox that the FBI was justified in using a secret informant to assist in the Russia investigation. Gowdy, a member of the House Intelligence Committee, attended a classified Justice Department briefing last week over the FBI’s use of the confidential source, identified as Stefan A. Halper.

“President Trump himself in the Comey memos said if anyone connected with my campaign was working with Russia, I want you to investigate it, and it sounds to me like that is exactly what the FBI did,” Gowdy told host Martha MacCallum. “I think when the president finds out what happened, he is going to be not just fine, he is going to be glad that we have an FBI that took seriously what they heard.”

Gowdy on last week’s briefing on the FBI confidential source: “I am even more convinced that the FBI did exactly what my fellow citizens would want them to do when they got the information they got — and that it has nothing to do with Donald Trump.”

Gowdy is really starting to look at life beyond the House – law firms, corporate boards, etc – and realizing he needs to do some image rehab for his Benghazi days. https://t.co/1aBObrRXOm