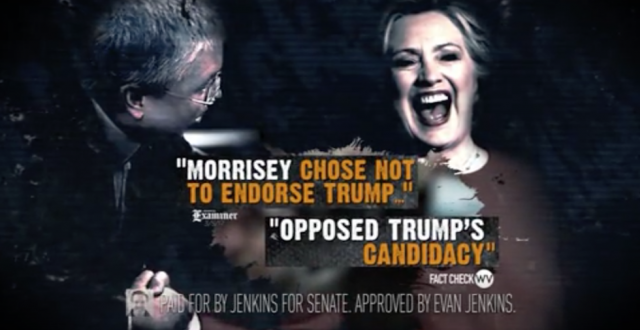 A Republican candidate for the U.S. Senate in West Virginia is running an ad showing his primary opponent shaking hands with Hillary Clinton — something that never happened. The ad uses a manipulated version of a photograph that originally showed his rival shaking the hand of someone else: President Trump.

Evan Jenkins, a congressman from West Virginia, is running in a six-candidate primary for the Republican nomination, with the winner set to take on Democratic incumbent Sen. Joe Manchin in the fall. The GOP primary is next Tuesday.

Despicable @EvanJenkinsWV photoshopped my photo with @realDonaldTrump and substituted it with Hillary, who I have always strongly opposed. Will the media call out Jenkins for his lying and dishonesty? Where is the accountability as this liar tries to deceive voters? #wvsen pic.twitter.com/Od2YxpXOzz

I’m a proud West Virginian. I proudly endorsed @realDonaldTrump, and I’m the only candidate in this race working with him to #MAGA. I’m proud of my 100% @nrlc rating and my A+ from the @NRA. As your senator, I will proudly stand for Mountain State values. Are you with me? #WVSEN pic.twitter.com/4ayaf56Tht

Previous Trump Organization Denies “Raid” On Doctor’s Office: He Gave Us Those Files Peacefully And Cooperatively
Next Coming Trump Biopic Will Dramatize Rise To Power Under Influence Of Late Homocon Roy Cohn [VIDEO]