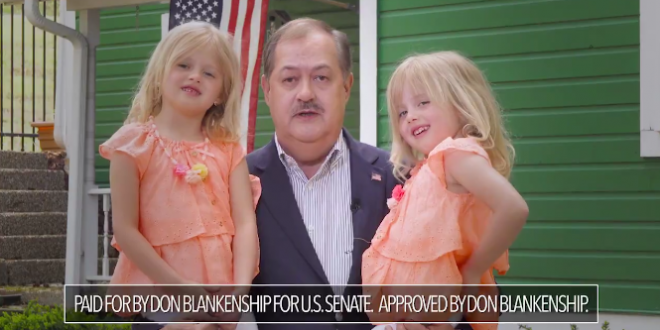 “While doing so, Mitch has gotten rich,” Blankenship adds. “In fact, his China family has given him tens of millions of dollars.” McConnell’s wife, Transportation Secretary Elaine Chao, is Chinese American. Her father is chairman of a shipping company.

The ad closes with a shot of Blankenship holding two young children, one on each arm as he pronounces, “I will beat Joe Manchin and ditch cocaine Mitch for the sake of the kids.”

What in the world did I just watch pic.twitter.com/4eudpGAxp0

The lifeless eyes. The flat affect. The dude is a textbook sociopath. Those poor girls!

(Also, I’m not proud, but “chinapeople” makes me lol every time.) https://t.co/H5eHSAjvti

His charisma just leaps off the screen https://t.co/1lfSJKtMjF

I hate to lose. So I’m gonna go out on a limb here and ask the people of West Virginia to make a wise decision and reject Blankenship!

No more fumbles like Alabama. We need to win in November. #wv #wvpol

Just to be clear, I’m not endorsing any single candidate in the #WVSEN race. I think there are two qualified, conservative and ELECTABLE candidates running and one train wreck who would guarantee another term for Joe Manchin. https://t.co/sReiwa5MlS