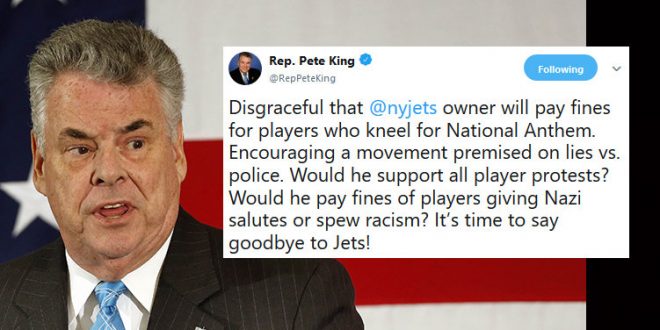 Long Island Rep. Pete King kicked off a storm of outrage Saturday when he likened NFL players kneeling during the national anthem to Nazis. The repugnant remark came in response to acting Jets owner Christopher Johnson’s announcement that the team would not penalize players who took a pregame knee to protest police brutality against black people.

Reached Saturday afternoon, King doubled down on his tweet. But he insisted that he wasn’t comparing the players to Nazis. Instead, he was making the point that private companies are free to impose free speech restrictions on its employees.

“For those who say it’s a freedom of speech issue, where is that line drawn?” King told the Daily News. “Would (Johnson) say the same thing if the players were giving the Nazi salute, waving the Confederate flag, espousing the NRA?”

Disgraceful that @nyjets owner will pay fines for players who kneel for National Anthem. Encouraging a movement premised on lies vs. police. Would he support all player protests? Would he pay fines of players giving Nazi salutes or spew racism? It’s time to say goodbye to Jets!

It is time to stop comparing a protest AGAINST violence to a salute that was all about violence. Do you get that Peter King?!?

Comparing apples and oranges is an idiom. It refers to comparing two unlike objects.

There’s not a Jew in this world who’d confuse peacefully protesting police brutality with Nazism you turd https://t.co/fbnLWHHZM2