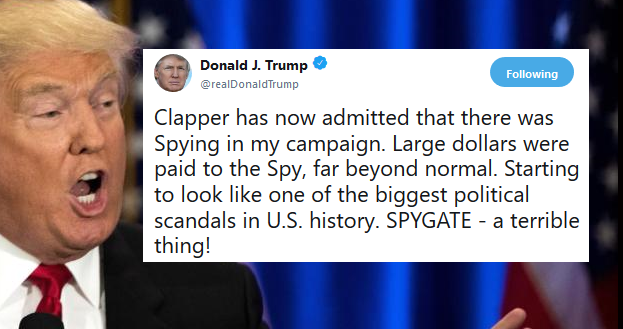 President Trump on Thursday attacked former Director of National Intelligence James Clapper on Twitter, rebuking the former intelligence chief for remarks he made on “The View” about surveillance of Trump’s campaign.

In a tweet, the president erroneously claimed that Clapper had “admitted” to placing a spy on his campaign staff, when in reality Clapper had merely acknowledged that an FBI informant had contacted several members of Trump’s campaign as part of the ongoing investigation.

Clapper has now admitted that there was Spying in my campaign. Large dollars were paid to the Spy, far beyond normal. Starting to look like one of the biggest political scandals in U.S. history. SPYGATE – a terrible thing!

Not surprisingly, the GREAT Men & Women of the FBI are starting to speak out against Comey, McCabe and all of the political corruption and poor leadership found within the top ranks of the FBI. Comey was a terrible and corrupt leader who inflicted great pain on the FBI! #SPYGATE

Previous RNC Chair Ronna McDaniel: The Only Reason Hillary Lost Is Because She Was So Out Of Touch [VIDEO]
Next Pentagon Busts LSD Ring At Nuclear Missile Base