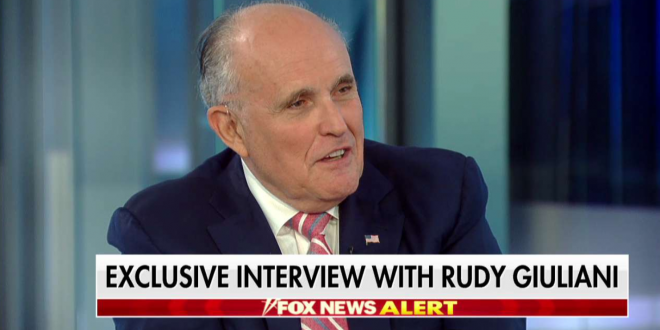 Giuliani made the revelation during an appearance on Fox News Channel’s “Hannity.” He also says the payment “is going to turn out to be perfectly legal” because “that money was not campaign money.”

Trump told reporters several weeks ago that he didn’t know about the $130,000 payment to Daniels as part of a nondisclosure agreement she signed days before the 2016 presidential election. Asked aboard Air Force One whether he knew about the payment, Trump said flatly: “No.”

Trump also said he didn’t know why Cohen had made the payment or where he got the money. Giuliani, who joined Trump’s legal team last month, said the president had repaid Cohen over several months, indicating the payments continued through at least the presidential transition, if not into his presidency.

Giuliani was, perhaps, not Trump’s best lawyer pick of all time. https://t.co/9y2YK7NGQN

Which raises the question: why announce this? The obvious answer is that Trump wants to protect Cohen so that Cohen can’t be turned against him. But I’ll be curious to see the explanation.

Rudy Giuliani, who is joining Trump’s legal team, just admitted on national TV that Trump paid the $130,000 in hush money to Stormy Daniels after weeks of Trump denying it & dodging the question. pic.twitter.com/ZUdxzOFgb1

Giuliani says Trump’s payment to Stormy Daniels was legal because it didn’t come from campaign funds.

On Cohen, Giuliani says, “[Trump] knew he would take care of things like this — like I take care of this stuff with my clients, I don’t burden them with every single thing.” pic.twitter.com/ZFgjNtCbnY

Seems like this Hannity interview with Giuliani will usurp Hannity’s interview with Roy Moore as the most self immolating of the Trump era https://t.co/0b51EZfnAp

Rudy Giuliani just basically admitted that Trump obstructed Justice. He told @FoxNews that Trump fired Comey because Comey wouldn’t say that he wasn’t a target of the investigation.