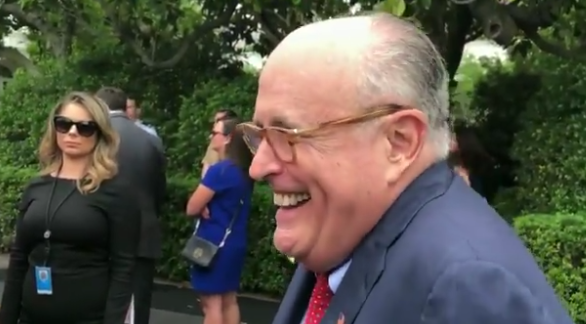 Giuliani Claims Trump Won’t Fire Jeff Sessions Before Mueller’s Probe Is Over: It Will Be Worked Out [VIDEO]

President Trump has no plans to fire Attorney General Jeff Sessions before the Russia probe is completed, the president’s lawyer said Wednesday. Rudy Giuliani told reporters outside the White House in an impromptu gaggle that Deputy Attorney General Rod Rosenstein and Special Counsel Robert Mueller should also be safe from Trump’s wrath.

“I don’t think the president is going to touch him (Sessions), Mueller or Rosenstein,” Giuliani said, according to video of the interview posted by Voice of America News. “In the long run I think it will be worked out.”

During impromptu exchange with a few of reporters on the @WhiteHouse South Lawn @RudyGiuliani laughs in response to question as to whether @realDonaldTrump has ever told him he’d like to fire @jeffsessions. pic.twitter.com/96aFQOsPof