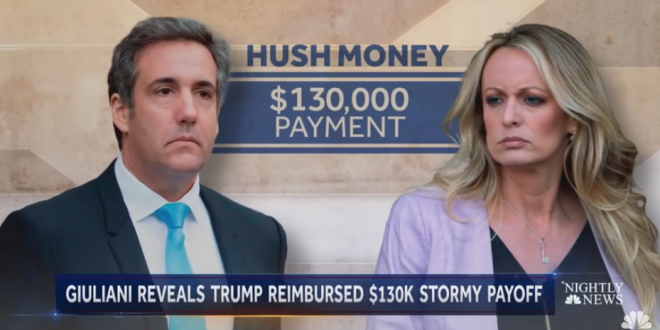 President Donald Trump only recently found out that he reimbursed his personal attorney, Michael Cohen, for a $130,000 nondisclosure agreement with adult performer Stormy Daniels just days before the 2016 election, his lawyer Rudy Giuliani claimed today.

In a telephone interview with NBC News, Giuliani insisted he only shared details of the payment with Trump about a week ago. “I don’t think the president realized he paid him (Cohen) back for that specific thing until we (his legal team) made him aware of the paperwork,” he said.

Giuliani said the president responded, “‘Oh my goodness, I guess that’s what it was for.’” Giuliani says the president was subsequently on board with the decision to go public with the reimbursement. “You’re not going to see daylight between the president and me,” he said. “We’re going to work hard to have a consistent strategy.”

His statements come days after Giuliani shocked many in Washington by admitting on Fox News that Trump had reimbursed his attorney for the $130,000 payment to Daniels just days before the 2016 election.

The admission came after weeks of insistence from the White House that Trump had no knowledge of the payment and Trump himself stating that he didn’t know where Cohen got the money to pay Daniels’ to stay quiet about an alleged 2006 affair with Trump.

“It’s not campaign money. No campaign finance violation. They funneled through a law firm and the president repaid it,” Giuliani said Wednesday. “That was money that was paid by his lawyer, the way I would do, out of his law firm funds or whatever funds, it doesn’t matter. The president reimbursed that over a period of several months.”