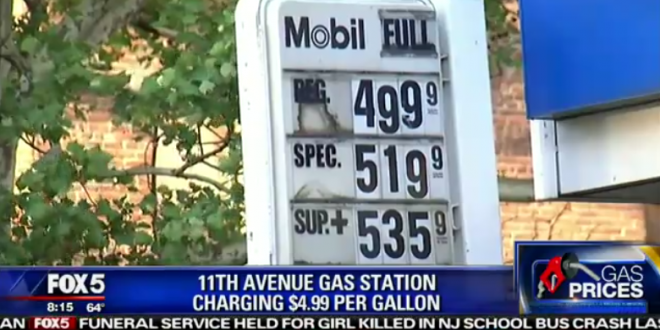 With the summer travel season fast approaching, gas prices are on the rise but some people are getting sticker shock in Manhattan. Regular gas has hit $5 a gallon at at least one station. A Mobil station on 11th Ave. in Hell’s Kitchen has raised its prices to $4.999 a gallon. Across the river in New Jersey, the statewide average is $3. The price gap has shrunk between New York and New Jersey after a huge gas tax increase was enacted in the Garden State during the Christie administration.

Surging prices at the pumps are crippling consumers across the country because for the first time since 2014 Americans will pay the highest gas prices on Memorial Day weekend. Just a year ago, people such as Miles Persons paid $3 a gallon for gas. Now, the average in California is $3.75 with a possibility of increasing. “I think anything above $3.50 starts to take a toll,” Persons said. So what is causing the uptick in prices? Some argue it’s in part because of President Donald Trump’s decision to impose sanctions on oil-rich Iran and pull out of a nuclear weapons agreement with the country.