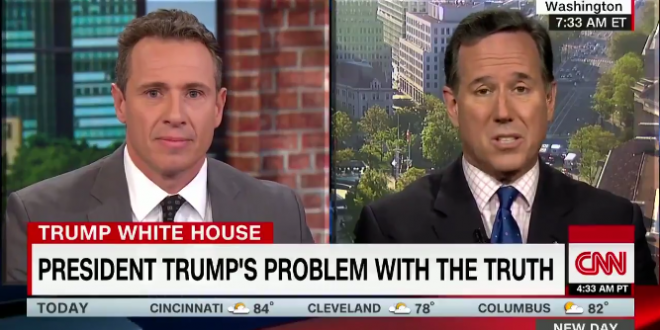 Asked on CNN’s “New Day” whether he believed Obama lied more often than Trump, Santorum, a former GOP senator from Pennsylvania, demurred, saying that the former president’s untruths carried more weight than those of the current commander in chief.

“I think the substance of the previous president’s lies were much more important than the substance of what the crowd size was at the inaugural,” Santorum said, referring to the White House’s claim last year that Trump’s inauguration crowd was the largest in history.

Santorum claimed that Obama’s lies were worse than Trump’s because, despite being considerably fewer, they were more substantive. “Moral relativism from a practicing Catholic,” Cuomo said, calling out Santorum’s faith. “Nobody held President Obama accountable for those lies,” Santorum persisted.

Cuomo called folly, noting that over and over Republicans campaigned on the mistaken claim “if you like your doctor you can keep it.” Cuomo ultimately asked the former senator if he thinks Trump lies and Santorum replied he didn’t know.

CNN’s @ChrisCuomo: “Do you think President Obama lied more than Donald Trump?”
Rick Santorum: “I think the substance of the President’s — the previous President’s lies were much more important than the substance of what the crowd size was at the inaugural” pic.twitter.com/IQqqSPflyN