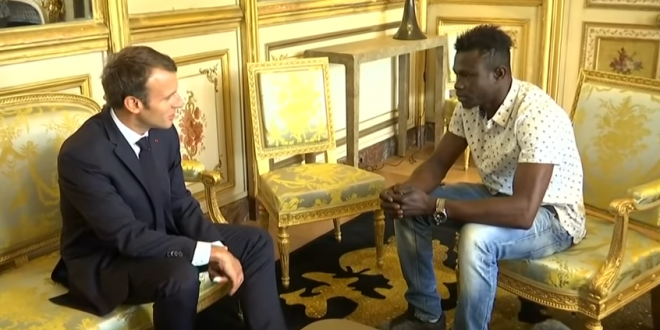 French President Emmanuel Macron said Monday that a Malian migrant would be given French citizenship after climbing a building to save a child’s life in Paris. Videos on social media show Mamoudou Gassama climbing four stories by pulling himself from balcony to balcony in order to rescue the 4-year-old, who had been left unattended, according to the BBC.

The rescue took place Saturday evening in the north of Paris and the following day an online petition was started calling for the Malian to be granted legal status. The petition gathered approximately 6,000 signatures by Monday morning, according to Franceinfo. Nicknamed “Spiderman” on social media, Gassama arrived in Paris a few months ago with the hopes of securing French residency.

After meeting him at the Elysee Palace, President Emmanuel Macron said he would be made a naturalised citizen. He personally thanked Mr Gassama, gave him a medal for courage and said he would also be offered a role in the fire service.

Mr Gassama is said to have arrived in France last year, taking the long and dangerous journey to Europe via a boat over the Mediterranean to Italy. Mr Gassama said he had been walking past when he saw a crowd gathered in front of the building. He told Mr Macron: “I just didn’t have time to think, I ran across the road to go and save him.”

Paris Mayor Anne Hidalgo was among those to praise the 22-year-old’s heroism and said she had called him to thank him. She referred to him as the “Spiderman of the 18th”, referring to the Paris district where the rescue took place, calling him an “example for all citizens”.

France’s extremist National Front, whose youth leader spoke at this year’s CPAC, has denounced the move.

Previous Donald Trump’s Memorial Day Message: America’s Dead Soldiers Would Be Really Proud Of What I’ve Done
Next GOP Senator: Trump Is No Role Model For My Kids