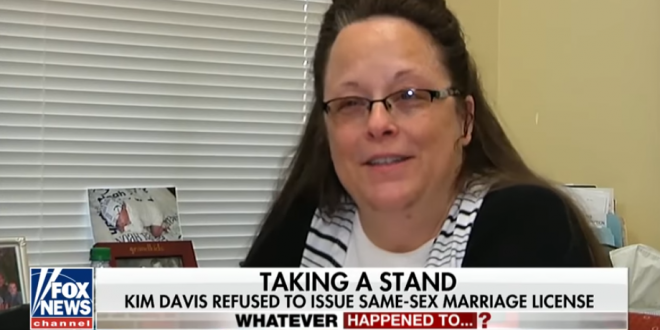 Last night Fox News ran a puff piece titled “Whatever Happened To Kentucky clerk Kim Davis?” in which she complained, “My face, my life, my past was smashed everywhere – not just here, not just in our country, but in all over the place, all over the world. I’ve got death threats.”

Davis goes on to claim, “I never envisioned anything like this. I had in my mind that I was going to retire with my mother and I was going to live an easy life. That’s what I wanted to do, but you know, the lord had something else in store for me.”

The purpose of the Fox piece, perhaps obviously, was to promote Davis’ book about “angry fist-pounding homosexuals” and her reelection campaign, but at least the gay man “trying to take her job from her” gets some screen time at the end.

The Liberty Counsel had heavily promoted the piece yesterday on their social media accounts, claiming that Mat Staver was also a “scheduled guest” – but he was apparently left on the editing room floor. Sad!