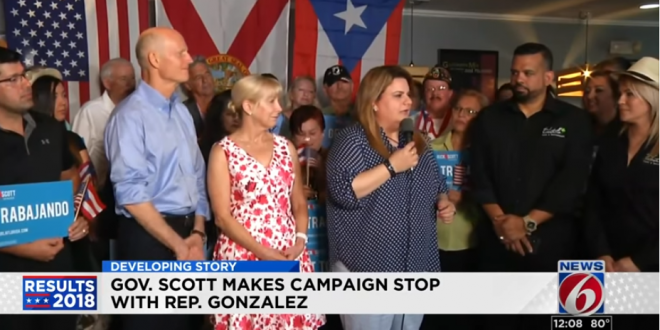 Florida’s Republican governor says he supports making Puerto Rico the nation’s 51st state. Gov. Rick Scott on Tuesday said the United States should “respect the will of the people of Puerto Rico.” The U.S. territory held a referendum last year where more than a half a million voters backed statehood.

The U.S. Congress has to approve any changes to Puerto Rico’s political status. Scott is running for the U.S. Senate this fall against incumbent U.S. Sen. Bill Nelson, and he made his comments during a campaign stop in central Florida.

Scott campaigned on Tuesday in Kissimmee, Fla., which is the epicenter of the state’s Puerto Rican population. Thousands of displaced Puerto Ricans moved to Florida following the devastation caused by Hurricane Maria last year, and will likely play an important role in the upcoming election.

Puerto Rico’s U.S. Rep. Jenniffer González-Colón endorsed Scott at a rally on Tuesday, praising his commitment to the island in the hurricane’s aftermath. Scott has traveled to Puerto Rico five times since the hurricane hit, leaving numerous people dead and the island virtually without power.

Previous Broken Window Forces Southwest Airlines Flight To Make Emergency Landing, All On Board Reported Safe
Next Trump Loses Yet Another Lawyer: Ty Cobb To “Retire”