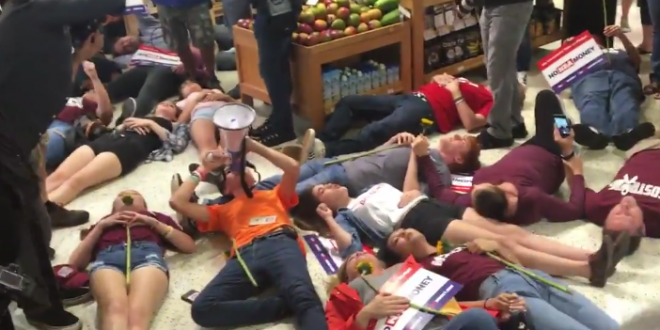 A huge victory for David Hogg!

Publix has suspended making political contributions in the wake of mounting pressure over its support of Adam Putnam, a Republican candidate for governor who strongly backs the National Rifle Association.

“We would never knowingly disappoint our customers or the communities we serve,” said company spokesman Dwaine Stevens in a statement Friday. “As a result, we decided earlier this week to suspend corporate-funded political contributions as we reevaluate our giving processes.”

The announcement came shortly before “die-in” protests organized by anti-gun activist David Hogg began in Florida, including at a store in Orlando just east of downtown. Hogg is a student at Marjory Stoneman Douglas High School in Parkland, where a gunman killed 17 students and faculty on Feb. 14.

VIDEO: The die-in protest at Publix in Coral Springs turned into a shouting match between protesters and Trump supporters. @MikeMagsCBS12 is there. Latest at 5. https://t.co/EU0vygBgbG pic.twitter.com/Xa4r08a8x9

‘Where shooting is a pleasure:’ Parkland school shooting survivor and activist David Hogg organized a ‘die-in’ protest at a Publix supermarket in Coral Springs today. Inside, they were met with shouts from National Rifle Association supporters >> https://t.co/nhFfywze9i pic.twitter.com/IoDM4BwjyG

Protesters doing a “die in” at @publix in Orlando to protest grocers contributions to @adamputnam pic.twitter.com/fs49nYwcnG