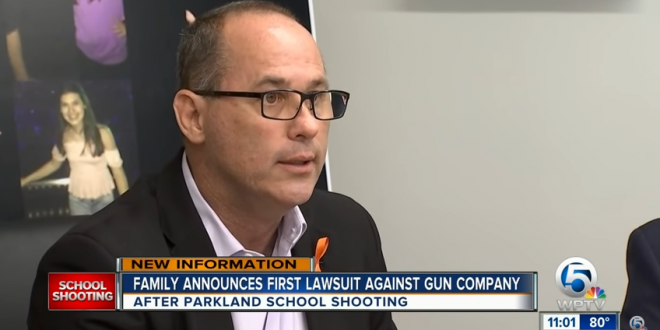 The families of two students killed in the school shooting in Parkland, Florida, are filing lawsuits against the gun manufacturer and seller of the weapon used in the massacre.

The parents of Jaime Guttenberg and Max Schacter say that American Outdoor Brands, the company that makes the AR-15 assault rifle used by the suspected shooter Nikolas Cruz, and Sunrise Tactical Supply, the store that sold it to him, are complicit in the attack that killed 14 students and three teachers.

“We need to change history when it relates to guns, and we need to make gun makers responsible,” said Guttenberg’s father, Fred, at a news conference in Miami. “We need to make sure they don’t end up in hands of people who will kill innocents.”

“We’re going to change history,” said Fred Guttenberg, one of the plaintiffs in a lawsuit filed Wednesday against the maker and seller of the Smith & Wesson 15 used by Nikolas Cruz in the Feb. 14 shooting. Guttenberg’s daughter, Jaime, was one of the 17 killed. He and Max Schachter, father of victim Alex Schachter, want a judge to pave the way for them to seek damages against American Outdoor Brands and Sunrise Tactical Supply.

A state law bars lawsuits against gun manufacturers in cases where there is no defect with the weapon. Miami attorneys Stephen Rosenthal and Steven Marks, representing the Guttenberg family, and Julie Braman Kane, representing the Schachters, said at a news conference Thursday that they want a judge to declare that the law prohibits only government entities from filing such lawsuits, not the victims of gun violence.

The company changed its name from Smith & Wesson Holding Company in 2016 in an attempt to dissociate itself from the furor about gun violence. Didn’t work.

Previous Director Of Federal Prisons Resigns Over Flouting Of “Departmental Norms” By Sessions And Jared Kushner
Next Tony Perkins: Patriotism Is “No Longer Optional” In The NFL Because They Learned Not To Tangle With Trump