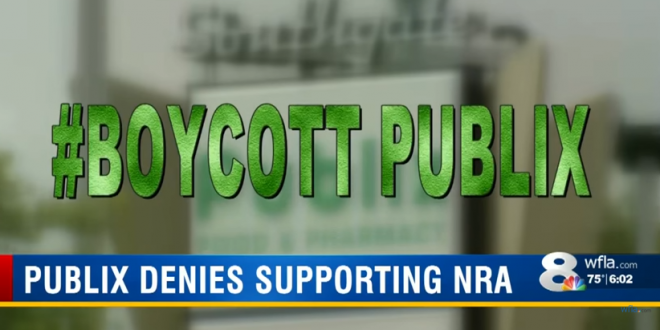 Publix has been Florida’s favorite grocery chain for decades — but some shoppers are turning their backs on the store after learning it donated more than half a million dollars to gubernatorial candidate Adam Putnam. A handful of state advocacy groups have gone to social media — Twitter in particular — urging shoppers to “#BoycottPublix” this Memorial Day weekend.

Some people have decided to boycott the store indefinitely, or until it withdraws $670,000 it has given to Putnam, a longtime Republican politician who drew ire after he called himself “a proud NRA sellout” and opposed Florida’s new, stricter gun purchasing laws in the wake of the Parkland school shooting.

Last week Publix responded to Twitter backlash, posting it considers a number of factors when supporting a candidate and has never given money to the National Rifle Association. In a statement to the Tampa Bay Times, it called Putnam the hometown candidate who is “pro-business.” Publix declined to make any additional comments on Monday.

Shoppers are posting their receipts from other chains to Twitter with the hashtag seen above. With annual revenues of $35B, Publix is the nation’s 13th largest retailer and is Florida’s largest private employer.

Previous Tony Perkins: School Shootings Happen Because Liberal Society Has Created A “Moral Vacuum” By Expelling God
Next Florida Town Apologizes For Zombie Alert During Power Outage: We Currently Have No Zombie Activity