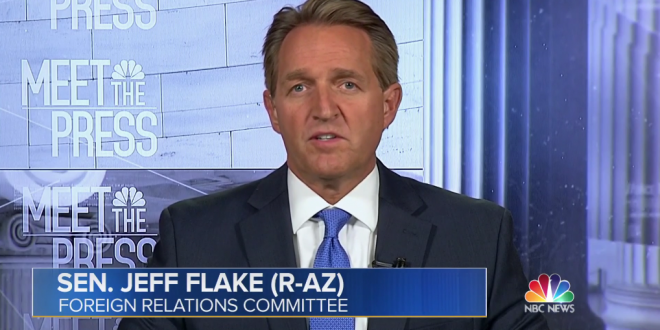 The senator has been one of the president’s most vocal GOP critics in Congress. He announced last fall he would not seek another term, citing, in part, the challenges that come with winning a GOP primary while speaking out against the president. He acknowledged Sunday that part of the reluctance of his fellow Republicans to also speak out is out of fear that they may face a similar backlash from conservative voters.

“This is the president’s party, and if you’re running in a primary right now and you stand up to the president, or stand up in some cases for empirical truth, then you have trouble in primaries,” Flake said. “And that’s no doubt. So, I do think, as we get through the primary season, perhaps, then many of my colleagues will find a voice, but right now, it’s difficult politically.”

While he isn’t running for re-election to the Senate, Flake left open the possibility that he could challenge Trump in a primary in 2020. While a presidential run is not in his plans, he said, he has “not ruled anything out.”

Sen @JeffFlake: “I do hope that somebody runs on the Republican side” against President Trump pic.twitter.com/RkrPYqpGFd