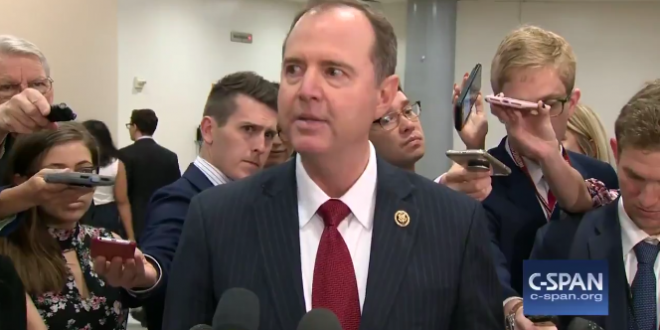 Dems After DOJ Briefing: “No Evidence” Of Spying

Congressional leaders on Thursday participated in an unusual pair of meetings with administration officials to discuss the FBI’s use of an informant in its counterintelligence investigation into the Trump campaign’s ties to Russia in 2016.

Democrats who attended the meetings said there was “no evidence” presented to support the claim repeatedly made by President Donald Trump in recent days that the FBI placed a “spy” in the Trump campaign. The meetings — which took place in different locations with overlapping but different attendees — were both led by FBI and DOJ officials and also included Director of National Intelligence Dan Coats.

.@RepAdamSchiff: “Nothing we heard today has changed our view that there is no evidence to support any allegation that the FBI or any intelligence agency placed a spy in the Trump campaign or otherwise failed to follow appropriate procedures and protocols.” pic.twitter.com/6EaVchw2SF

For the record, the President’s Chief of Staff and his attorney in an ongoing criminal investigation into the President’s campaign have no business showing up to a classified intelligence briefing.

Previous Brian Brown: Send Money To Stop “The LGBT Jihad”
Next Director Of Federal Prisons Resigns Over Flouting Of “Departmental Norms” By Sessions And Jared Kushner