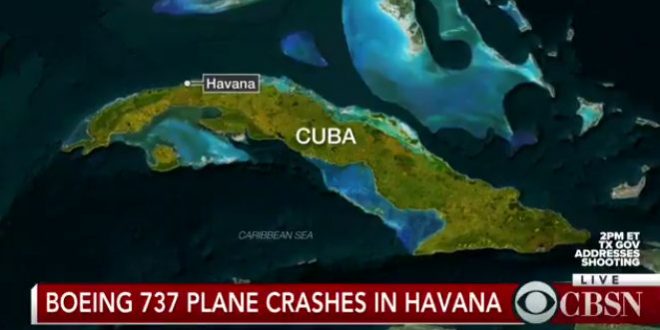 A Boeing 737 operated by state airline Cubana crashed on takeoff from Jose Marti International Airport in Havana on Friday with 104 passengers and nine crew aboard, coming to rest in a farm field where firefighters sprayed the charred fuselage with hoses. There was no immediate word on casualties. Officials said the plane was headed to the eastern city of Holguin when it crashed between the airport in southern Havana and the nearby town of Santiago de las Vegas.

The plane lay in a field of yuca-root plants and appeared heavily damaged and burnt. Firefighters were trying to extinguish its smoldering remains. Government officials including President Miguel Diaz-Canel rushed to the site, along with a large number of emergency medical workers and ambulances. Residents of the rural area said they had seen some survivors being taken away in ambulances.

#BREAKING PHOTO: The scene of serious passenger plane crash in Cuba where 104 were reportedly onboard – CBC pic.twitter.com/b7WPt9GHV1