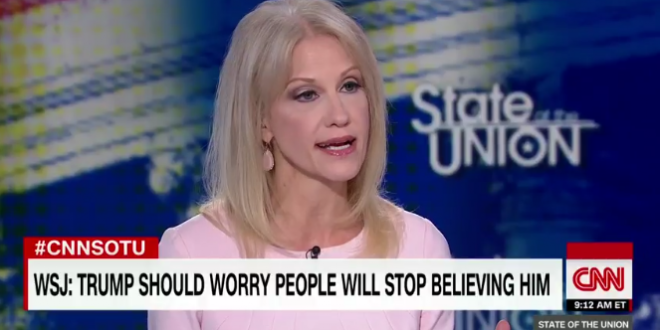 Conway: The White House Doesn’t Have A Credibility Problem Because “The President Doesn’t Lie” [VIDEO]

Counselor to the president Kellyanne Conway said Sunday that she doesn’t believe the Trump White House has a credibility problem. “No, I don’t,” Conway told CNN’s “State of the Union” when asked if she thinks the White House has issues with its credibility.

Conway, when pressed on President Trump’s falsehoods, insisted “the president doesn’t lie.” The comments from Conway come after The New York Times reported Friday that Trump knew about the $130,000 payment to adult film actress Stormy Daniels before he denied knowledge of it.

CNN’s Jake Tapper: “Do you think there’s a credibility crisis in this White House?”