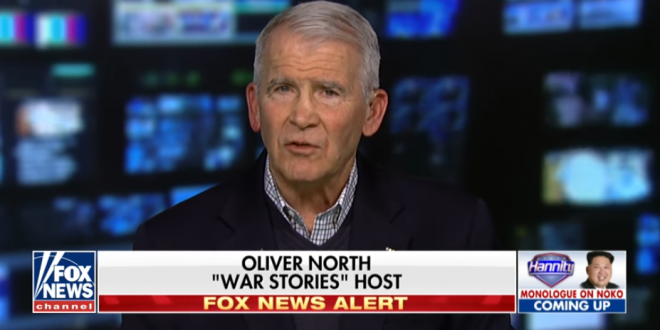 Convicted Felon Oliver North: The NRA Is The Victim Of “Civil Terrorism” Worse Than During Jim Crow Era

The National Rifle Association named Oliver North—the Reaganite ghoul who was indicted in 1988 for his involvement in the Iran-Contra affair—its new president this week. In an interview with the conservative Washington Times, published on Wednesday, North said his organization has been the victim of “civil terrorism” by gun control activists.

Oh? What’s happening to the NRA today is worse than how civil rights organizations were treated in the Jim Crow era, you say? I must have missed the part where a church NRA members attended was firebombed, killing four young girls. I must have missed the news when former NRA president Wayne LaPierre was assassinated, after the FBI urged him to kill himself.

North goes on to baselessly accuse Parkland student activists of being “lawbreakers.”

“What they did very successfully with a frontal assault, and now intimidation and harassment and lawbreaking, is they confused the American people,” he said. “Our job is to get the straight story out about what happened there, and to make sure that kind of thing doesn’t happen again because the proper things are being done with the advocacy of the NRA.”