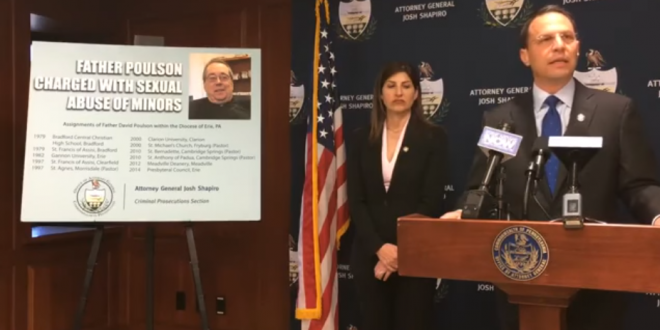 Catholic Priest Arrested For Molesting Boys, Allegedly Forced One Victim To “Confess” To Him About Assaults

A Catholic priest in the Diocese of Erie is charged with sexually assaulting two boys, including an altar boy whom the priest allegedly abused after Mass on Sundays and then made go to confession to describe the incidents, authorities said. Rev. David Poulson, 64, was arrested Tuesday morning and charged with indecent assault, endangering the welfare of children and corruption of minors, Attorney General Josh Shapiro announced at a press conference Tuesday.

While employed in active ministry, Poulson allegedly abused one boy repeatedly in the church rectories at St. Michael’s Catholic Church in Fryburg and St. Anthony of Padua Catholic Church in Cambridge Springs. On more than 20 occasions, Poulson allegedly abused the boy after he served as an alter boy at Mass on Sundays. Poulson would then require the altar boy to confess to him about the sexual assaults, prosecutors said.

Many of the alleged assaults took place in a cabin Poulson owned with Mark Bettwy, a sergeant with the Pennsylvania State Police. He is currently being held at the Jefferson County Jail, with bail set at $300,000.

The charges, including indecent assault, endangering the welfare of children and corruption of minors, were recommended by a statewide investigating grand jury, which investigated Poulson to find out if the alleged assault occurred when he was an active priest at the Erie diocese.

“Poulson assaulted one of his victims repeatedly in church rectories,” Shapiro said. “He made that victim go to confession and confess the abuse – to Poulson. This was the ultimate betrayal and manipulation by Poulson. He used the tools of the priesthood to further his abuse.”

ERIE, Pa. (@AP) — A Roman Catholic priest has been charged with abusing at least two boys during four decades as a priest in Erie’s diocese. The state attorney general says the 64-year-old Rev. David Poulson abused one of the victims more than 20 times inside church rectories.