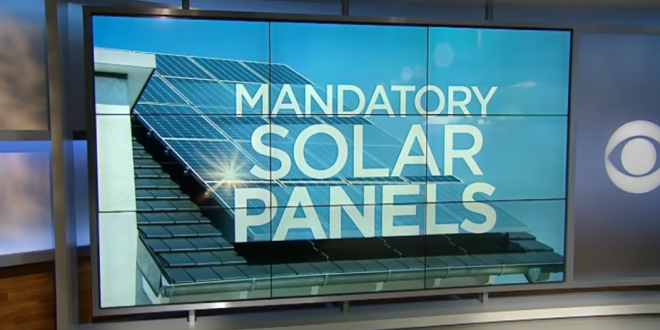 On Wednesday, The California Energy Commission approved a ruling requiring new homes and low-rise apartment buildings to include solar panels. The rule will take effect in January 2020. According to the AP, the mandate still needs final approval from the state’s Building Standards Commission, which will likely happen.

The California Energy Commission, the agency that approved the plan, estimates that new home prices will increase by about $10,538. Over the life of these new homes, residents could still see larger returns on their investments. The commission projects that home energy savings will total about $16,251 over the span of 30 years.

California has been a leader in statewide initiatives to combat climate change, including setting aggressive goals like lowering carbon pollution to at least 40 percent below 1990 levels by 2030, as well as requiring that utility companies get at least 50 percent of all electricity from renewables by the same year.

About 20 percent of California’s new homes are built with solar arrays and the state has held about a third of the nation’s total jobs in solar since 2013. A state energy department analysis estimates the new building code will add about 5,400 jobs to that market.

Previous Giuliani: We’re Not Responsible For What Cohen Does
Next MARYLAND: Kevin Kamenetz, Leading Dem Candidate For Governor, Dies Of Heart Attack At Age 60 [VIDEO]