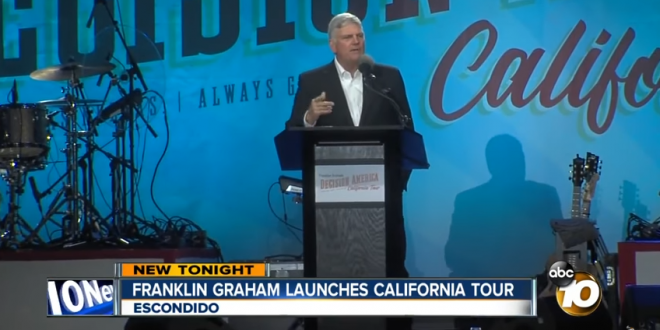 CALIFORNIA: Franklin Graham Launches Primary Tour To Take Back The State From The “Godless” [VIDEO]

Franklin Graham stood in a packed locker room at the Rose Bowl, surrounded by fellow evangelists, pastors, and his top Los Angeles donors. It was two weeks before the California primary, and Mr. Graham was urging them to take a stand against their state’s “blue wall.”

The blue wall of California, Mr. Graham told the gathering, represents secular values that have taken root on the country’s west coast. “Progressive?” he went on, “That’s just another word for godless.” Now is the time for churches to “suck it up” and vote.

Mr. Graham is leading a three-bus caravan up the middle of the state, one of the biggest political battlegrounds this year, to urge evangelicals to vote and to win California for Jesus. The two week tour ends on the day of the primary, June 5.

Along the way — at a park in Escondido, outside the Rose Bowl stadium in Pasadena, on the beaches of Oxnard, at the fairgrounds of Fresno and Modesto — Mr. Graham is hosting 10 campaign-style rallies, complete with highly-produced videos, top Christian singers and laser light shows, to urge evangelicals to join his mission.

Hit the link for much more, including Franklin Graham’s instruction for pastors to preach about candidates because progressives want to take away their tax-exempt status anyway. The two pillars of Graham’s crusade are abortion, and, of course, LGBT rights.