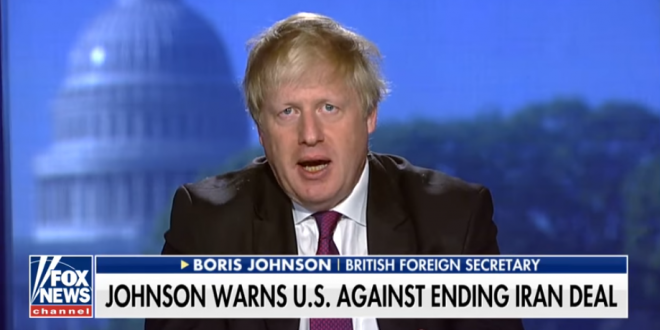 British Foreign Secretary Boris Johnson said U.S. President Donald Trump would be a deserving winner of the Nobel Peace Prize if he can solve problems in Iran and on the Korean peninsula. “If Trump can fix North Korea and the Iran nuclear deal then I don’t see why he’s any less of a candidate for the Nobel Peace Prize than Barack Obama,” Johnson told Sky News.

Johnson is on a two-day visit to the United States, during which he is seeking to prevent Trump from pulling out of the Iran nuclear deal. The U.K. foreign secretary also appeared on Trump’s TV news show of choice, “Fox & Friends.” Johnson’s trip follows similar endeavors by German Chancellor Angela Merkel and French President Emmanuel Macron, who both traveled to the U.S. late last month and attempted to persuade Trump not to leave the Iran pact.

Previous Randy Rainbow: Rudy And The Beast [VIDEO]
Next Southern Baptist Women Denounce Their Leader For Saying That It’s “Biblical” To Lust After Underage Girls