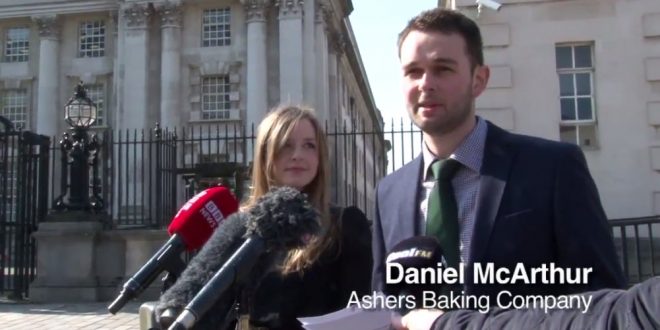 A bakery run by evangelical Christians is to launch a fresh attempt to overturn a £500 award made against it for refusing to bake a cake promoting same-sex marriage. Ashers bakery, which has branches in Northern Ireland and is financially supported by the Christian Institute, is taking its claim to the Supreme Court on Tuesday, which is sitting in Belfast this week.

The firm has twice been found to have discriminated on the grounds of sexual orientation after it cancelled an order by a gay activist in 2014 for a cake decorated with the slogan: “Support gay marriage”. Gareth Lee had specified the motto for an event to mark International Day Against Homophobia. Same-sex marriage is not legally recognised in Northern Ireland.

David Scoffield QC, for Ashers’ owners the McArthur family, said: “This is a case of forced or compelled speech, unlike other cases which have come before the court.”

He added: “Mr and Mrs McArthur have been penalised by the state in the form of the judgement at the County Court for failing through their family company to create and provide a product bearing an explicit slogan ‘Support Gay Marriage’ to which they have a genuine objection in conscience.”

He said it was plainly a case of compelled speech. Mr Scoffield said the case, a simple transaction, raised an issue of principle since those with deeply-held religious or philosophical convictions could be compelled to act against their beliefs.

RELATED: The Christian Institute is effectively the British version of US hate groups such as the Liberty Counsel. They have launched numerous court battles against every aspect of LGBT civil rights, perhaps most notably when they fought to retain Britain’s infamous Section 28 law.