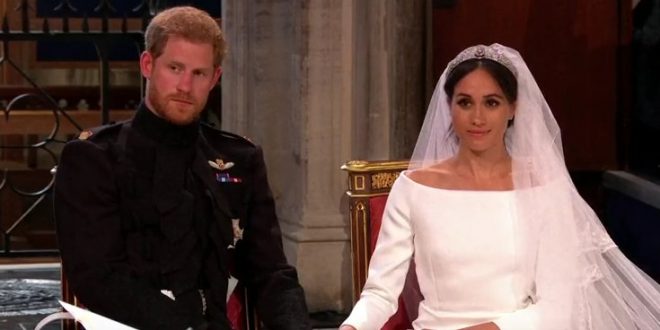 And they’re married! Britain’s Prince Harry and US actress Meghan Markle were wed Saturday at Windsor Castle in a ceremony that combined British pageantry with modern style. In a departure from tradition, Markle walked much of the way up the aisle unchaperoned, followed by her 10 bridesmaids and page boys — a move that is unprecedented for a royal bride in Britain.

Her elegant white dress with an open bateau neckline was by British designer Clare Waight Keller, Givenchy’s first female artistic director. Her 16-foot-long veil was held in place by a diamond bandeau tiara lent to her by the Queen.

Only when she reached the 15th-century chapel’s Quire was Markle accompanied for her final steps to the foot of the altar by Prince Charles, Harry’s father. Harry, flanked by his brother and best man Prince William, looked emotional as he waited at the altar, dressed in the frockcoat uniform of the Blues and Royals.

The Most Reverend Michael Curry performed a rousing address. Bishop Curry is the first African American to preside over the Episcopal Church. “There’s power in love,” he tells the couple, who are seated and holding hands. “We were made by a power of love and our lives were meant to be lived with that love,” he says.

Playing off the style of a classic American black preacher, he does an amazing, theatrical discourse on the power of love — to heal wounds, to end poverty, to guide government. On BBC, there are cut-aways to the look on the prim and proper faces of royals. As he closes, he says has to close, “we gotta get ya’ll married.” “Well, that was forceful…,” says the BBC announcer.