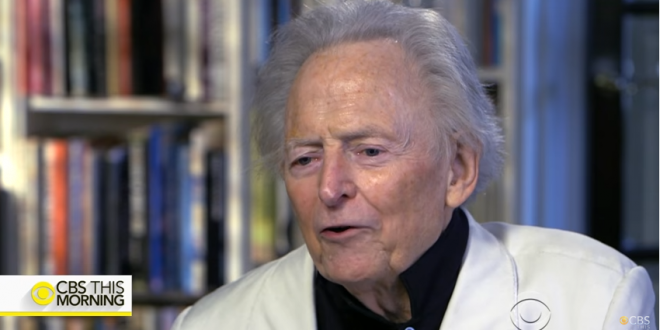 Tom Wolfe, an innovative journalist whose technicolor, wildly punctuated prose brought to life the worlds of California surfers, car customizers, astronauts and Manhattans moneyed status-seekers in works like “The Kandy-Kolored Tangerine-Flake Streamline Baby,” “The Right Stuff” and “Bonfire of the Vanities,” died on Monday in a Manhattan hospital. He was 87.

His death was confirmed by his agent, Lynn Nesbit, who said Mr. Wolfe had been hospitalized with an infection. He had lived in New York since joining The New York Herald Tribune as a reporter in 1962. In his use of novelistic techniques in his nonfiction, Mr. Wolfe, beginning in the 1960s, helped create the enormously influential hybrid known as the New Journalism.

Remember when we had a president who would acknowledge the passing of great American artists ? We won’t get any moving statement today from POTUS regarding Tom Wolfe.

“If I have been judged to be right-wing, I think it is because of the things I have mocked,” Tom Wolfe said in 2004. Yeah, and some other stuff too. However: He could really, truly, hysterically, torrentially, titanically write, which most of them can’t. RIP.