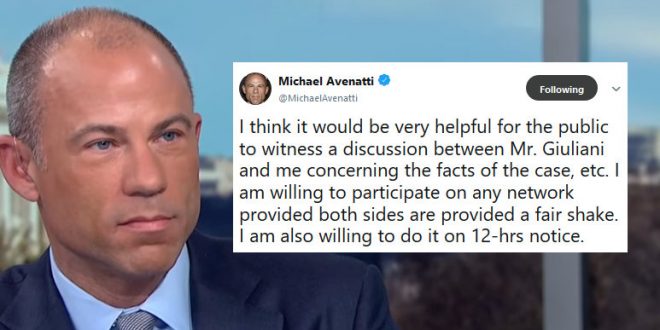 Stormy Daniels’ lawyer Michael Avenatti on Tuesday challenged President Trump’s lawyer Rudy Giuliani to a face-to-face discussion on any news network. Giuliani, the former mayor of New York, has been on a media blitz since he joined Trump’s legal team late last month. During an interview with Fox News’ Sean Hannity last week, Giuliani said that Trump had reimbursed his personal lawyer Michael Cohen for a $130,000 “hush money” payment to Daniels.

I think it would be very helpful for the public to witness a discussion between Mr. Giuliani and me concerning the facts of the case, etc. I am willing to participate on any network provided both sides are provided a fair shake. I am also willing to do it on 12-hrs notice.