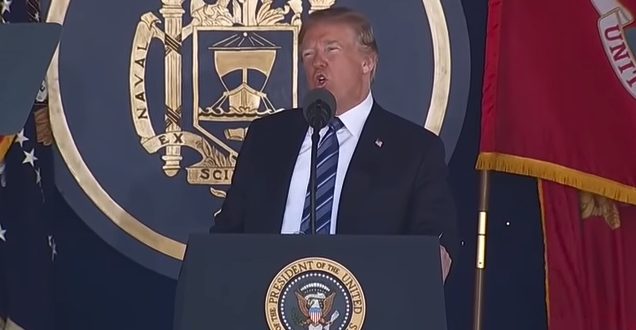 This morning Glorious Leader gave the commencement address at the US Naval Academy in Annapolis and as usual he told some outright whoppers.

THE FACTS: That’s not right. U.S. military members have gotten a pay raise every year for the past 10 years and several have been larger than this year’s 2.6 percent increase. Pay increases in 2008, 2009 and 2010, for example, were all 3.4 percent or more.

TRUMP: “We have now the lowest number of ships that we’ve had since World War I, and very soon you’re going to get to 355 beautiful ships. 355. That’s almost a couple of hundred more ships.”

Today, it was my great honor to deliver the 2018 Commencement Address at the United States @NavalAcademy in Annapolis, Maryland. Congratulations!